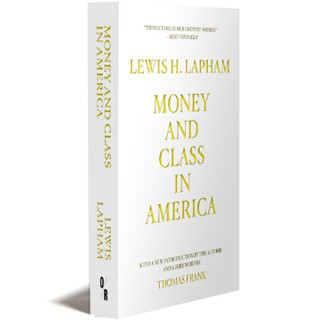 Money and Class in America – by Lewis Lapham   $20

30th Anniversary Edition, featuring a new introduction by Lewis Lapham and a foreword by Thomas Frank.

In the United States, happiness and wealth are often regarded as synonymous. Consumerism, greed, and the insatiable desire for more are American obsessions. In the native tradition of Twain, Veblen, and Mencken, the editor of Lapham’s Quarterly here examines our fascination with the ubiquitous green goddess.

Focusing on the wealthy sybarites of New York City, whom Lewis H. Lapham has been able to observe firsthand in their natural habitat, Money and Class in America is a caustic, and often hilarious, portrait of a segment of the American population who, in the thirty years since the book was originally written, have become only further removed—both in terms of wealth and social awareness—from everyone else.

“His sentences simply radiate elegance. They are arranged as carefully as the foyers and dining rooms he describes. Always does he choose the precise phrase... Compared to Lewis Lapham...nearly everyone else is a phony.”
—THOMAS FRANK

“No one knows more about the psychology of the rich than Lewis Lapham.”
—TOM WOLFE

“Without doubt our greatest satirist—elegant, honorable, learned and fair. I love reading him.”
—KURT VONNEGUT