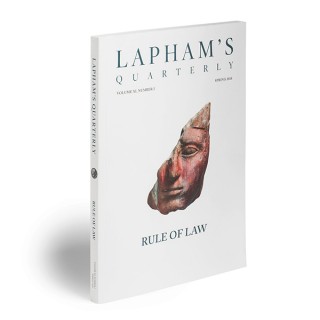 In Rule of Law, Lapham’s Quarterly searches both above and below the law to investigate where it comes from and who it really serves. Plutarch relates how Solon put equitable legislation in place for ancient Athens, Anne Boleyn requests a jury of her peers, and Lewis Carroll tries to keep a Wonderland court in order. Frederick Douglass tests the constitutional basis of slavery and finds it wanting, while Olympe de Gouges balances out the declared rights of man by offering up a few rights of her own. Legal decisions—in poetry, proclamation, and high-court opinions—weigh in on matters of import: land rights on the moon, the quality of God’s commandments, the carnal regulations for Buddhist monks, and whether the tomato is or is not truly a fruit. Original essays include Ralph Nader on the lawlessness and power that rules America, Richard Cohen on Samuel Johnson’s secret legal brilliance, and Joan Cocks on the sovereign citizen movement.