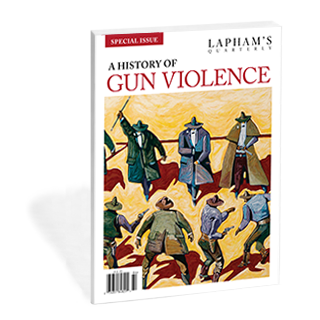 This special issue of Lapham’s Quarterly traces the history of gun culture. Beginning with poet Ludovico Ariosto’s epic account of the origins of firearms—a technology destined to “transform both society and war”—the issue offers engrossing and tragic glimpses of the gun as a technological wonder, an object of psychological fascination, a battlefield tool, and a relentless weapon of terror.

Among the forty-five texts in the issue, which span a millennium, is a fourteenth-century Taoist treatise on “fire weapons,” a letter from Thomas Jefferson on interchangeable gun parts, Félix Fénéon’s reports on gun violence in early twentieth-century France, Laura Ingalls Wilder’s eloquent description of two daughters watching their father melt lead into bullets, and radiologist Heather Sher’s clinical description of victims of the Parkland shooting. Additional texts come from Annie Oakley, Luther Standing Bear, Carl von Clausewitz, Alexander Hamilton, and others. The issue also features reproductions of paintings, sculpture, and photography; infographics; and an essay on the dramaturgy of gunplay by Lewis H. Lapham.

Throughout the issue, essays on America’s obsession with guns and debates over the Second Amendment are placed in dialogue with the consequences of gun violence, which causes the deaths and injuries of more than 110,000 Americans annually.